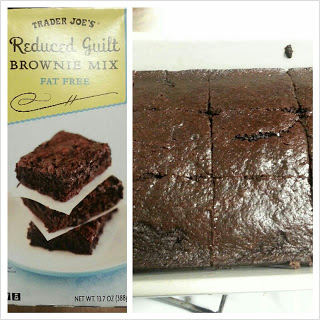 I picked up a box of this Reduced Guilt Brownie Mix at Trader Joe’s on my last trip through the store.  I’m a complete brownie fanatic but I don’t necessarily like the calorie content that comes with a brownie.  I know, you can make a brownie as healthy as possible by substituting ingredients (apple sauce, banana, water, etc.) but sometimes you just want a good ole brownie.

These Reduced Guilt brownies intrigued me because all you had to do was add in 2/3 cup of fat free vanilla Greek yogurt (or plain with a splash of vanilla).  Considering I am a Weight Watchers member, I quickly converted the nutrition label into points and it was 3-points for 1/12th of the box.  Not bad, considering most brownies would cost 5 points or more.  I then calculated it with the Geek yogurt and it was still at 3-points, so I had to get it!

I whipped these up as the box stated — and I admit I added in 1/2 cup liquid egg substitute (eggbeaters) because I could just not get my brownie mix to go smooth.  I baked them per the box directions and they turned out great!  Keep in mind since these are a fat free brownie, they do have a cake-like texture to them.  They are most certainly chocolatey and moist, but they’re not ooey gooey fudge brownies. Overall two thumbs up — definitely a rebuy!