Skimming through the Weight Watchers Good Deal cookbook for dinner ideas, there was a particular Asian flare dish that really caught my attention. I’m thinking it was primarily due to the fact it was a beef stir fry. I decided it had to be on the dinner menu, so I put the few items I needed to pick up at the grocery store on my shopping list … and dinner was on its way to being created.
I followed the recipe to a T and found it to be rather easy to whip together. Dinner came together in under 30 minutes which was also a bonus.  The beef turned out rather moist, the sauce was just right and the vegetables were perfect – cooked but still had some crunch to them.  The recipe actually calls for the serving of brown rice which I liked to see because most recipes call for one dish, not the accompanying sides. In addition to the rice, I served this alongside some fresh steamed broccoli.
The greatest part? The entire meal was only 6 points plus values! ¾ cup of beef mixture and ½ cup rice. 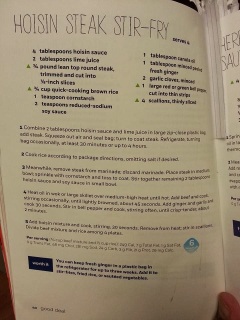