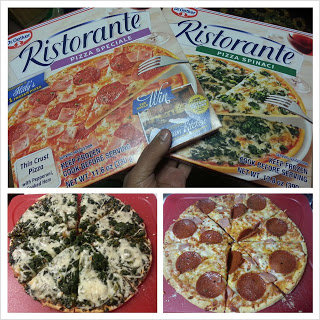 I was invited to take part in the BzzAgent Ristorante Pizza campaign.  I was surprised this came back out as a campaign since I was invited to take part in a Ristorante campaign earlier in the year.  I knew going into I that I enjoyed Ristorante pizza so I was going to get two different pies.  I picked up one with pepperoni  (Speciale) because that’s what my boyfriend eats and the other with spinach (Spinaci) because that’s just yummy on a pizza.
Ristorante pizza is advertised at being the #1 pizza in Italy.  The pizza itself is quite good.  It’s thin-crust pizza with a fair amount of cheese and toppings to evenly distribute over the whole pizza.  Sometimes when you get frozen pizzas there’s sparse ingredients over the top (like 5 pepperoni on the whole thing).  I do like the Ristorante brand because the pizza is not only thin crust (as I mentioned) but it’s very flavorful plus it cooks up in 11 minutes.
According to the Dr. Oetker website the Pizza Spinaci, is “a unique pizza layered with sun-ripened tomatoes, savoury leaf spinach, cheese and mozzarella, perfected by a hearty garlic sauce.”  Being a garlic lover, you can definitely taste the hint of garlic in there – it’s not overpowering, but it plays off in the background.  It’s also slightly creamy in taste – this is probably one of my favorite frozen pizzas. I love it and I typically keep one in the freezer for myself.
Whereas for the Pizza Speciale, according to the Dr. Oetker website: “This unique thin crust pizza with Pepperoni and Cooked Ham make this pizza a culinary feast.  Edam, Mozzarella and spicy herbs add to the full flavor of this wonderful pizza.”  Granted, this is the only pizza sold by the brand that has pepperoni on it but it’s very flavorful.  The sauce is seasoned just right, the pepperoni has the right amount of spice and the ham gives it a new flavor.  Totally delicious!
I realize these pizzas may not be sold at all retail locations – but I happen to find these at a few of my local grocery stores.  They typically retail for $2.99 but you can sometimes get them for $2.50 or less if you have a coupon.  Some stores (like a pricier grocery store in my area) sells these for $4.99 each.
<img src=”https://img.bzzagent.com/image/ristPizza.jpg?Type=activity&Activity=5502699803&Campaign=4073133023&Uid=1278590&token=4c46370c6a53399ebb8be912f430f9d2&#8243; alt=””/>