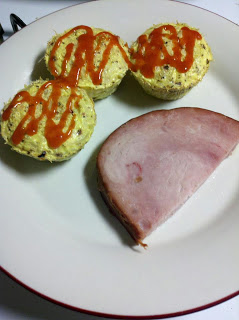 I’ve been getting bored with breakfasts as of late and have been finding I’ve been gravitating towards the same things.  Typically some sort of deli meat on toasted light wheat bread.  Of course I switch it up, but at the end of the day, it’s still deli meat and that can be really boring.  One thing about me is I am and probably always will be a complete carbaholic.  I LOVE anything that’s a carb – bread, potatoes, rice, etc.  If it’s starchy, I love it.  I had wanted hash browns and since I’m not a terribly huge fan of eggs I decided to try morphing the two together.  I looked up a few ideas online and found an egg white version but since I don’t like egg whites, I decided to just go with my own idea and chug along.  I originally was going to chop up my ham steak and drop it into the muffin tins, but when I got to that step there just wasn’t enough room in the tins.  That would work if I used giant muffin tins.
The only ingredients I used were 1 cup Simply Potato shredded potatoes (this is for 2 servings – ½ cup a serving – 3 tarts per serving), 1 cup egg beaters (1/2 cup per serving),  minced garlic, black pepper, sea salt, garlic powder and Mrs. Dash Spicy seasoning.
I mixed the minced garlic (use as much/little as you like – I love garlic so I put a fair amount) with the shredded potato, add in sea salt, black pepper and garlic powder to your liking and mix until blended.
Split the mixture up into the 6 greased (with Pam) muffin tins.  In the same bowl the potatoes were in add in 1 cup of egg beaters, black pepper, sea salt and the spicy Mrs. Dash seasoning.  Blend and pour the mixture evenly over the 6 cups of potatoes.
Bake in a 350 degree oven for roughly 20 minutes (until eggs are cooked through).
I ate with 3 ounces Carando breakfast ham steak and I topped my eggs with sriracha (LOVE that stuff!).  They were really yummy – the potatoes mixed with the eggs and made a fabulous flavor.
On my last trip to the grocery store they didn’t have the shredded potatoes, so I bought the diced with onion – which would be 2/3 cup of diced potato in place of the ½ cup per serving.
3 muffins comes out to be 3 PointsPlus Values (2 for the potatoes, 1 for the eggs).