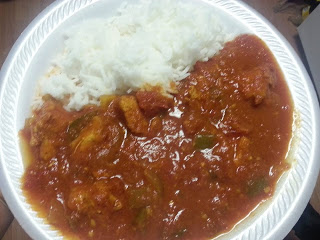 I saw an Instagram post about this Crock Pot Chicken Tikka Massala and I immediately wanted to make it.  I love Indian food, although I don’t get it very often because my boyfriend isn’t a big fan of the spice.  Typically I relay on getting my Indian dishes from a few companies that sell frozen pre-packaged meals but we all know that homemade is SO much better.
This particular recipe was quite easy to throw together and it was not spicy in the least bit. The one thing I will tweak next time I make it (which I will, I’ve repurchased a few of the ingredients I’d need to make it again) I will be adding salt.  After it cooked for 7 hours in the crock pot I found it was missing something … and that something was salt.  Now, I don’t really use salt in my food, but I’ve found in cooking you need a little bit of salt to bring all flavors together.
You get roughly a 1 cup serving for only 4 points plus values, which is totally worth it.  I paired the dish with ¾ cup basmati rice which was 4 points plus.  The only thing missing was a piece of naan … which I will have handy the next time I make this dish!
You can find the recipe here: http://www.theskinnyfork.com/blog/skinny-crock-pot-chicken-tikka-masala